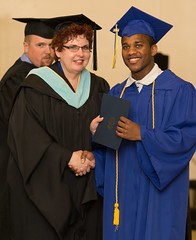 Marvin Davis and Austin Brownell have been at Larned Juvenile Correctional Facility (LJCF) for nearly five years for mistakes they made as adolescents.

Society could have neglected the existence of the two young men for their full sentences, but it didn’t.

Rather than take the easy way out, LJCF and Barton Community College made sure Davis and Brownell, and others at the facility, were given the chance to reinvent themselves, the conscientiousness to reflect on their troubled past, and the skills to write their own futures.

Davis and Brownell rose to the challenge, both earning an associate in general studies Thursday afternoon during a graduation ceremony. Both hope to eventually become Certified Professional Accountants.

“This is the greatest accomplishment of my life so far,” Davis said. “I have two months to go, and I’m very grateful Barton opened the doors to us and gave us a chance and gave me something to look forward to.”

Brownell echoed Davis’ comments, saying he feels great about what he has done for himself.

“I never would have gone to college,” he said. “Now I plan to get my bachelor’s degree and a master’s degree. When you get locked up, you rely on your past. When someone hands you a future, it could change you.”

Program Specialist at LJCF Tom Snyder worked closely with the two graduates. He said they overcame great odds to reach their goals.

“They worked hard and took the full 15 hours this semester,” he said. “They have solid plans for what they want to do with their futures and they have good support around them.”

Snyder said after they are released, they will still have access to and constant communication with their mentors to ensure the pursuit of their goals is going well.

“The best thing we can offer inmates at the correctional facilities is a chance to take advantage of educational opportunities that all other citizens have,” he said. “They are going to be our neighbors and a vital part of society in the future, so we need to set them up for success.”Barton’s Coordinator of Correctional Education Services Will Rains said Barton’s effort to provide education programs in prisons is simply common sense. Barton has been in the Larned facility since 2001.

“Together, we are making a difference,” she said. “Whether providing vocational training opportunities for immediate entry into the workplace upon release or an academic course of study … we are offering options that make a difference not only to the incarcerated population, but to our communities and state.”Dean of Workforce Training and Community Education Elaine Simmons agreed, saying Barton’s efforts are part of a bolder, broad vision for the future of the state.