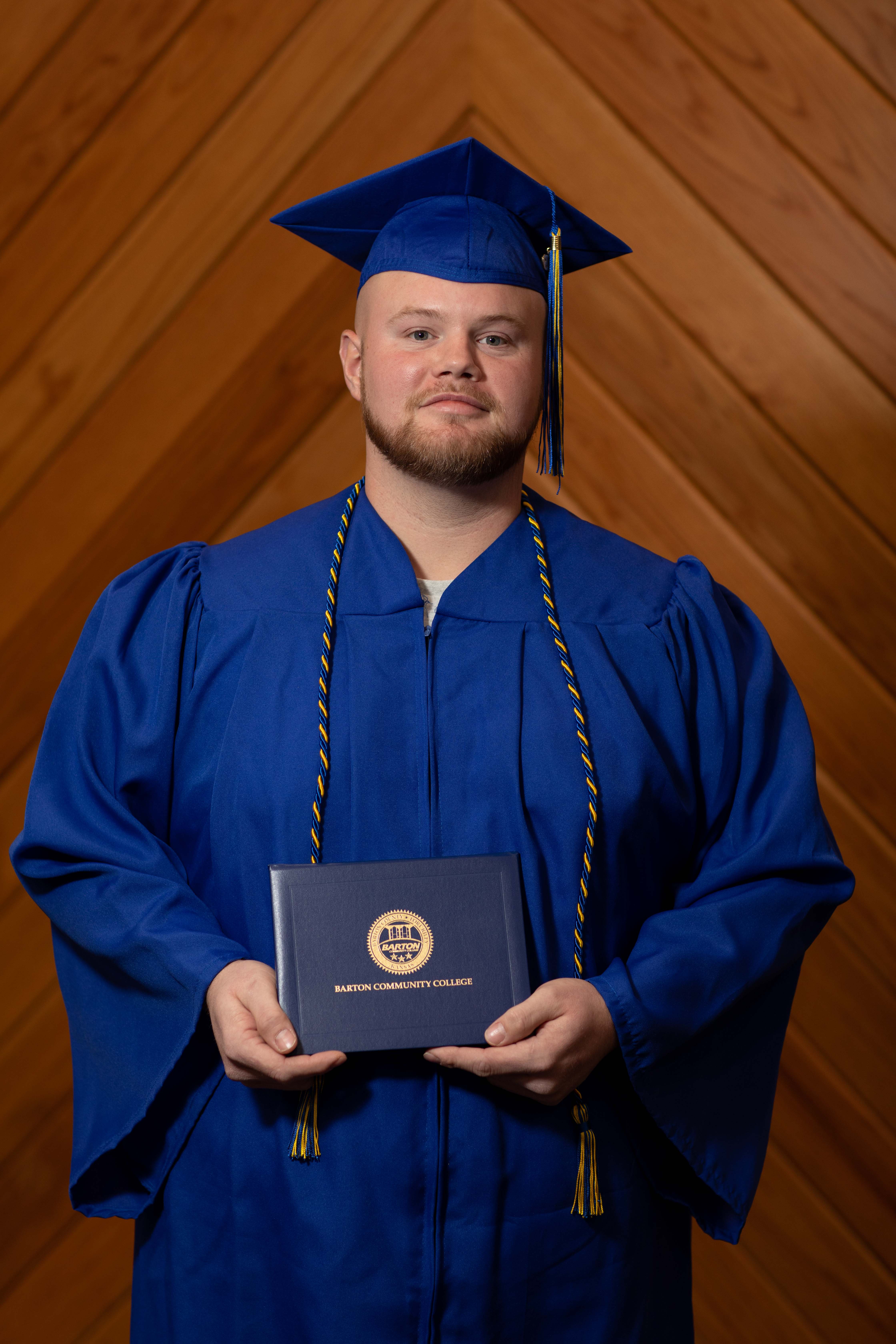 David Marcus is 30 years old. He has been incarcerated at Ellsworth Correctional Facility for his entire adult life, since he was 18. And like most inmates in correctional facilities, he has a release date and it is only four years away.

When that date comes, the difference between Marcus successfully assimilating as a productive member of society or winding up incarcerated again, a well-researched cycle known as recidivism, could be the education he pursued through Barton Community College while behind bars.

“Never in a million years did I think I would get any type of college schooling at all,” he said. “This has been a wonderful journey, and with me doing this in here, I hope it inspires my nieces and nephews to further their education after they graduate from high school.”

Upon release, Marcus hopes to start his own company, using welding to save up some money to buy his own truck and become a truck driver.

“I also want to start a family and I want to spend as much time as I can with my sister, nieces and nephews and parents,” he said.

His sister, Amanda Heltzel, drove from Kansas City, Kan. to attend the learning celebration. She said Marcus stepped outside of his comfort zone to pursue his education and she’s proud of everything he has accomplished, and that he is indeed inspiring her children.

Marcus said he owes a lot to the faculty and staff at Barton, who he said remained steadfast in their commitment and dedication to helping inmates create the potential for a bright future.

“They’re wonderful people and they go above and beyond,” he said.

Now he looks to the future, one he hopes is bright and inspirational for his family as a first-generation college graduate.

“It’s just surreal,” he said. “I never thought I’d do anything like this, especially being locked up in here.”

Marcus was one of 145 inmates who completed 229 total degrees, industry certificates and high school diplomas in the last year, all of them with their own unique stories and plans on how to take advantage of their second chance.

Momodou Jallow was first incarcerated in 2006, and will be released in March of 2022. He has been taking classes from Barton since 2011.

“I’m thankful for all the people who have helped me get this (associate degree), especially the teachers who drive over here no matter the weather,” he said. “They always up for us; in every way.”

Tony Hunt was first incarcerated in 1997 and will be released in January of 2028.

“I already have too many regrets, so now it’s about seeing an opportunity and taking full advantage of it,” he said. “I never envisioned this. I never envisioned getting higher education or anything of that nature.”

Hunt hopes to open a construction business after he is released, and hire on troubled youth to help them overcome their challenges before they make mistakes that would land them behind bars. He has been leading self help cognitive therapy classes for 13 years while serving his sentence, which he says will help him succeed in his new endeavor.

“Whatever community I’m in, I’ll start with the trades, hire the outcasts and get them jobs and train them up,” he said.

The inmates who crossed the stage Thursday night come from all walks of life, but those who shared comments had at least one common sentiment – gratitude for the symbol of hope they held in their hands at the end of the night, and more notably for the people who made it possible. Several names were mentioned but the one whose praise seemed to be a recurring theme was Nicole Serpan, Career Advisor for Barton’s Building Academic Skills in Correctional Settings (BASICS) program.

After the fanfare of crossing the stage to shake hands and receive certificates, diplomas and degrees, the inmates heard from Executive Director of Intuitional Advancement Coleen Cape, who oversees the Barton Foundation. She recognized 23 inmates who received scholarships for the spring and fall of 2019.

Cape told the crowd that to her, they were not inmates, since to be an inmate is a circumstance. She said to her, they are all college students, and that she is as proud of them as she would be of her sons if they were in a similar circumstance. She also told them with a story that words are meaningless without actions, and that their actions of pursuing an education will “reverberate throughout the universe.”

Barton President Dr. Carl Heilman left the inmates with words of encouragement about their futures, emphasizing the importance of continuing their educations and the pursuit of deeper purpose in life.

“I hope you continue, and leave here someday and leave your mark,” he said. “You’ve left your mark here. Pass it on.”

For more information about Barton’s BASICS program and how inmate education impacts society and the economy by reducing crime and recidivism, visit bartonccc.edu/breakthecycle.